Before my official themed posts start tomorrow, I thought I’d do something quick and small: sharing my son’s Wyrd and Wonder reading list. Although  it wasn’t planned, this pleasantly aligned with the W&W challenge of the day: getting started in fantasy.

My son is only a few months old, but I’ve been reading to him since he was a newborn, and he’s been turning pages on books since he was 3 months. Books are his favorite thing; his first laugh was for a book (which I somehow managed to catch on video.) I bought some new ones for him this month that I hope will grow his interest in fantasy. 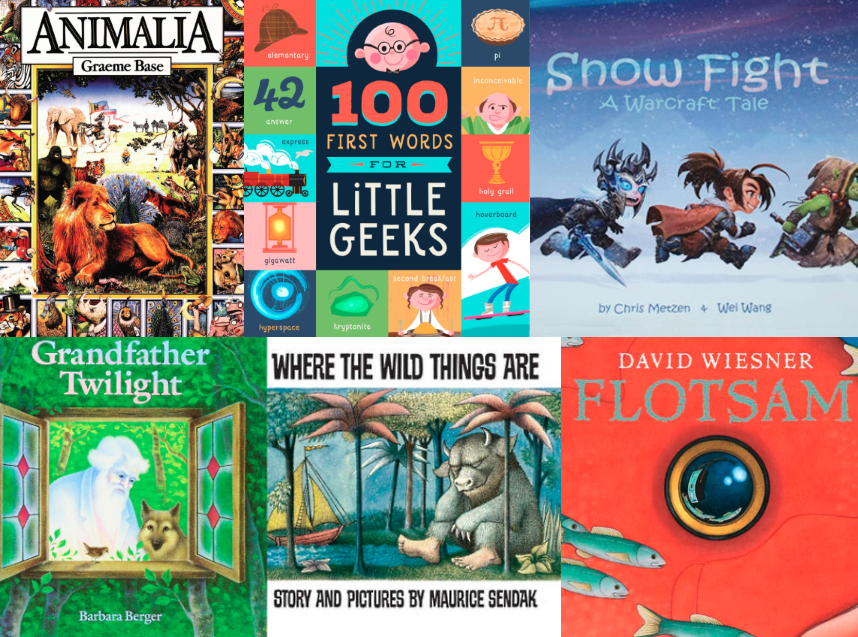 I already had a copy of 100 First Words For Little Geeks (and it’s so amazing), but I also purchased Snow Fight: A Warcraft Tale. They’re both pretty straightforward when it comes to their fantasy elements. (I’m not even going to pretend I bought Snow Fight for my son. I straight-up did it for my decade-long addiction to WoW.)

Animalia, Grandfather Twilight, Where The Wild Things Are and Flotsam don’t seem like really good fantasy choices. You’d think that picture books with elves, magic and castles would fit the bill of a fantasy list a little better.

But I chose Animalia, Grandfather Twilight and Where The Wild Things Are specifically because they started my path towards loving fantasy and all things speculative. I specifically remember spending hours with these books, staring at the illustrations and being enamored with their fantastical elements. They had this alluring otherness; they seemed to reveal places of limitless dreams, beauty and adventure. It created a longing in me for something else, and ultimately made my imagination a vital part of my happiness. And I think that in a way, that’s a key part of what it means to love fantasy.

I don’t believe that introducing children to Harry Potter, C.S. Lewis or Tolkien is the only way to grow a love of fantasy in them; I don’t think it requires tropes such as wizards, elves, castles or grand scale events. I think it can come from any impossible image—something fascinating and wondrous that gives a child their first realization that they posses the ability to imagine places and adventures unbound by the reality they live in. To learn to love that part of you, to exist within it from a young age and allow it to take you places…that’s how I want my son to start his journey towards fantasy.

[Have any picture books to recommend that transported you or your family to another place? Let me know! I’m always trying to add to my list!]

ABOUT THE 13TH SHELF
Reviews of books and book-ish things. Mostly spectulative fiction and a touch of the paranormal. Maybe some non-fiction too.
ABOUT ME
Hi, I'm Rin! I'm just your run-of-the-mill bookworm geek, enjoying all sorts of places that don't exist. More...

DNF: did not finish. I give a novel 35% of the book to hook me before giving up. DNFs are not necessarily bad books.
GREAT SF & F BOOK BLOGGERS
Beneath A Thousand Skies
Black Sail Books
Bookends & Bagends
A Dance With Books
Falling Letters
Jake is Reading
Infinite Speculation
Natrosette
One More
Parsecs & Parchment
Roll to Save
Spells & Spaceships
Follow The Thirteenth Shelf on WordPress.com